This new version benefits many improvements and adjustments in order to offer you a better gaming experience.

Now, a cheat mode is accessible from the title screen to add extra lives/credits and choose the starting weapon. Backers who participated in the Kickstarter campaign will be able to start a new game directly from the second level in the exclusive demo reserved for them.

Be careful, because using the cheat mode will disable the save system and will not save the new high scores. 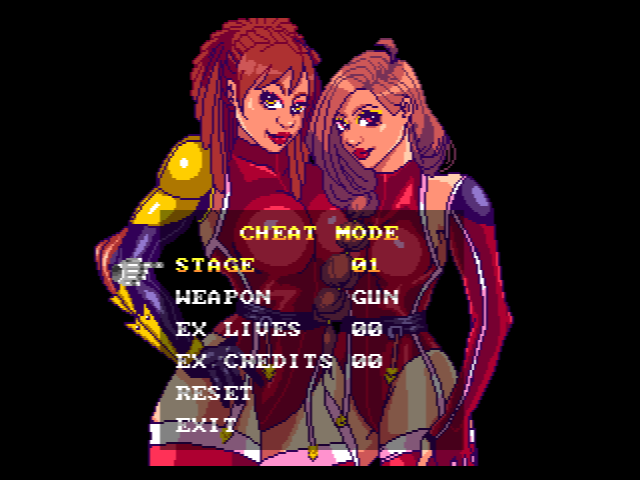 We have also made a better balancing of the difficulty level and fixed several bugs present in the previous versions.

You can get the new version now on Itch.io. We advise you to play Irena Genesis Metal Fury on a SEGA Genesis / Mega Drive or a system like the Mega SG for a better experience.

If you want to play on an emulator of your choice, please take into consideration that the game can suffer from a more or less important latency. Please modify the settings of your emulator to reduce the latency so as not to spoil the game experience.

As a reminder, people who participated in the Kickstarter campaign have access to an exclusive demo with an additional level.

The White Ninja Studio team hopes you enjoy this new version of the official demo.

To help us, please send us your feedback.

Hey, guys. I played your demo. What can I say. Graphically, I like everything, the palette, the drawing. Now a little bit about the sad. I played on Fusion, did not fill in and test on SMD. It feels like the first one is an input lag, or it's connected somehow with animation, it's hard to explain, but the boat is poorly controlled, there is not enough smoothness, even if you change the speed of movement. Secondly, methiorites that we can shoot down. Let's look at this moment from the side of realism. You and I are flying over a green planet, but for some reason the methiorites from below are highlighted in blue??? How? Where does such a light source come from? After all, it is logical that the light from the planet is green, so the methiorite should be green from below. Then the third, the base with guns. Here you need to decide something, some passages are unreadable, you are flying and do not understand whether you can fly here or not - this is a huge gameplay mistake. Well, the last one, it's clear that this is a demo, but there are no checkpoints after killing the miniboss, this is certainly not critical, but unfortunately times have changed now and the player will quit the game if he has to go through everything all over again. I'm not saying that there are no players who will get it on the contrary, but it will scare away some casual players. Make the option of checkpoints and without. Everyone, good luck in developing the project. Of course, you should have a little more interesting design solutions in terms of who we are fighting with. All this is still an unmemorable enemy. Somehow he doesn't have something in common that unites the enemy. Thanks for attention. Greengh0st team PSCD Games.

Thank you for your very interesting feedback.

Concerning your problem with the controls, it’s about the input lag present on some configurations and emulators. We advise you to decrease the input lag in the options of your emulator, KEGA has some options like “perf sync” decreasing the input lag.

If you can play on a SEGA Genesis / Mega Drive, then the experience will be more pleasant with a more precise control.

We have taken note of your suggestions and other remarks.

Thanks again for your feedback.

Important suggestion, I downloaded the demo and realized that the game is very difficult even in easy mode, one hit the ship is destroyed and this makes the game bad for most new players and even old ones like me, the ship will be destroyed after 3 hits would be better, and every time you lose a life you should return with the special bar full

I also found this to be true but it really adds to the experience. I like that they are making a game for shmup junkies instead of a generic game. To be fair pretty early on in the first level they give you a shield which gives you 4 hits I think? If you miss said shield, then yes it can be difficult. Power ups-shields-win

there's no way to download the demo, what's the secret?

Hi Flaviogames, normally you can download the demo now from the link on this page or on the main game page.

I may be an idiot but I can't figure out how to download the demo. I see a file name above but clicking it does nothing :( I tried opening the Itch.io app on my computer and clicking Install but that also did nothing.

Hi mikkelmarius, after checking you can now download the demo from this page or by going to the game homepage.

Awesome, thanks! I can't wait to buy the finished version of this game.